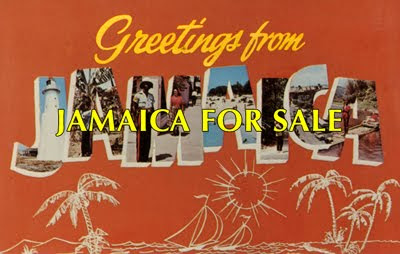 Jamaica for Sale is a feature-length documentary film about the economic, social, and environmental impacts of tourism and unsustainable development in Jamaica, directed by Esther Figueroa and produced in collaboration with Diana McCaulay.

On Wednesday 18 November, Alice Yard will host the Trinidad and Tobago premiere of Jamaica For Sale, with director and producer Esther Figueroa in attendance. The film will be introduced by economist Norman Girvan, and afterwards Figueroa will engage the audience in an informal discussion.

read it all here
http://aliceyard.blogspot.com/2009/11/esther-figueroa-jamaica-for-sale.html
Posted by Richard Mark Rawlins at 4:44 PM