Still from “The Life Movie” 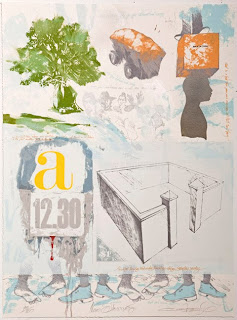 Like a complicated multiple-exposure shot in an old avant-garde film, Christopher Cozier’s Now Showing conjures up an atmosphere of both nostalgia and sinister comedy. The eye doesn’t know where to focus first. The imagery derives from the artist’s private vocabulary — as he explains in a series of notes — but refers to a familiar gritty urban Caribbean space you could call Kingston or Georgetown or Nassau, though in this case the specific location is Port of Spain.

In his sardonic late-70s poem “The Spoiler’s Return”, Derek Walcott imagined the shade of the calypsonian on leave from Hades — “I decompose, but I composing still” — gazing down from the heights of Laventille across his former hometown. Through the eyes of his narrator, Walcott builds up an almost cinematic portrait of the city. Spoiler remarks:

all Port of Spain is a twelve-thirty show,
some playing Kojak, some Fidel Castro . . .

read it all here at CRB

The launch of Now Showing on 16 July, 2010, is covered in issue 13 of Draconian Switch. Filmmaker Mariel Brown has made a short documentary about the creation of the work.

Posted by Richard Mark Rawlins at 4:34 AM