Founded in 1993 by Monique Nouhchaia Sookdewsing, the Readytex Art Gallery in downtown Paramaribo is Suriname's leading commercial gallery. Many of the artists participating in the SPAN project — including Sri Irodikromo, Kurt Nahar, Marcel Pinas, Dhiradj Ramsamoedj, George Struikelblok, Roddney Tjon Poen Gie, and Jhunry Udenhout — show their work at Readytex or are represented by the gallery. As SPAN co-curator Christopher Cozier remarks, Readytex — on the second floor of a large commercial building on Maagdenstraat, also occupied by other branches of Nouchaia's family business — is an obligatory stop on Suriname's art circuit.

The programme of activities on the Paramaribo SPAN opening weekend includes several events outside the main exhibition venue at the DSB headquarters, all intended to broaden SPAN's conversation about the contemporary art scene in Suriname. On Saturday 27 February at 10 a.m., the Readytex Art Gallery will host an art "fatu" — an informal gathering — for the participating artists and organisers, visiting critics and curators, and other invited guests. Works by a range of contemporary Surinamese artists will be on display, and Nouhchaia will discuss plans for the new cultural centre she will open in March 2010.
Posted by Richard Mark Rawlins at 12:28 PM No comments: 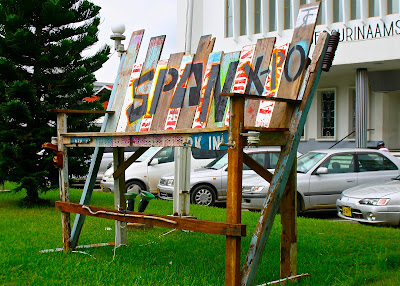 Paramaribo SPAN. An exciting name for an exciting exhibition. On the occasion of its 145th anniversary, De Surinaamsche Bank N.V. offers its former directors residence, situated in the backyard of its head office in Paramaribo, Suriname, as a platform for young artists (19 from Suriname and 10 from the Netherlands). From February 27th to March 14th the public can view art here in an entirely different manner: a horizon broadening experience!

De Surinaamsche Bank which commemorates its 145th anniversary this year joined the initiative. KIT Publishers (Amsterdam) expressed its willingness to publish a beautiful book along with this exhibition.

It is the first time in Suriname that an exhibition can be seen with so much artistic freedom. There is latitude for the visual artists – literally and metaphorically spoken. That's why many of the artists have produced work which is blazing new trails and exploring new grounds. In short: no familiar two-dimensional art work as we are accustomed to, but a bubbling, energetic, dynamic entity of expression.

Thomas Meijer zu Schlochtern of the Center for Visual Art Rotterdam invited the Trinidadian artist Christopher Cozier to act as the curator for the exhibition. Cozier is responsible for the selection of the Surinamese artists. Thomas Meijer zu Schlochtern made a selection from the work which the Rotterdam participants in the ArtRoPa project produced as a result of their stay in Suriname.

Paramaribo SPAN is more than an exhibition. There is a book, a blog, and an extensive program of sideline activities such as lively conversations, special bus tours for art lovers, and an Art in the City evening. Paramaribo SPAN: a cultural event which is both unique and opening-up new horizons.

Apart from the exhibition there is an interesting side program including four Art Conversations. The first one takes place the day after the opening and is called:
An Afternoon in the Garden. This Conversation will be attended by some internationally leading art specialists, among whom are Annie Paul from Jamaica, Courtney Martin from Los Angeles, Leon Wainwright from Groot-Brittain, Richard Rawlins from Trinidad & Tobago, and Julieta Gonzales from Puerto Rico.

Along with the exhibition is publication is issued in which Surinamese artists, writers, and international curators and producers of exhibitions speak about the recent developments in the visual art sector of Suriname and about the bubbling cultural climate in Paramaribo.

With the project is a blog: http://paramaribospan.blogspot.com/. The blog, managed by Nicholas Laughlin from Trinidad & Tobago, offers insight in the context of the Paramaribo SPAN project. There is also a Paramaribo SPAN Facebook Group which is open to those who are interested.
Posted by Richard Mark Rawlins at 12:08 PM 2 comments:

Photo of the day! By Laura Ferreira 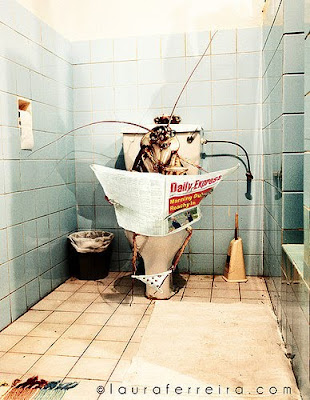 "Ode to Woodbrook"
Posted by Richard Mark Rawlins at 8:59 PM No comments:

the STAGe a new concept in CARNIVAL

Posted by Richard Mark Rawlins at 1:35 PM No comments:

Posted by Richard Mark Rawlins at 6:37 AM No comments:

Posted by Richard Mark Rawlins at 6:28 AM No comments: