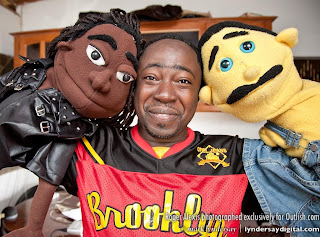 Puppetry has always been a thing for kids, but Roger Alexis has definitely made it a must-see for adults. Trinis have been 'cracking up' over the short films "Thou Shall not Horn" and "The Fete", which have gone viral, amassing over 98,000 and 70,000 views, respectively on YouTube, and have been circulating Facebook. Distinctly Trini, and starring the puppets Santana and Janice, the films are written, directed and produced by Alexis, who's been dabbling in video creation since his teens.

Posted by Richard Mark Rawlins at 8:35 AM