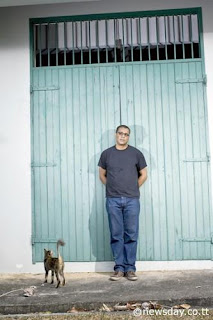 CHRISTOPHER COZIER is the official artist of the trinidad+tobago film festival 2010 (ttff/10), presented by FLOW.

The ttff is an annual celebration of the best in Caribbean and Caribbean Diaspora film, as well as films from Latin American countries that border the Caribbean Sea. This year the festival runs from September 22 to October 5.

One of the distinctive features of the ttff is the Festival Image. Every year, an artist is commissioned to create an image that in some way reflects the art of film or the cinema-going experience, especially as it relates to the Caribbean. This image is used throughout the festival, and becomes the basis of the festival’s poster. 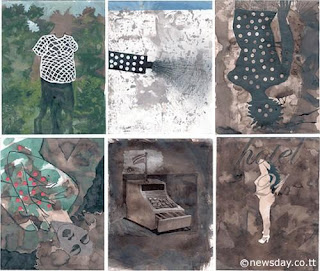 Detail from the installation Tropical Night by Christopher Cozier

Christopher Cozier, this year’s selected artist, is one of Trinidad and Tobago’s leading contemporary artists.

He has participated in a number of well-received art exhibitions in the Caribbean and internationally. Earlier this year, Tropical Night, a series of Cozier’s drawings, formed part of the exhibition Afro Modern: Journeys Through the Black Atlantic, at the Tate Liverpool gallery in the United Kingdom. Read it all here in the Newsday
Posted by Richard Mark Rawlins at 12:21 PM