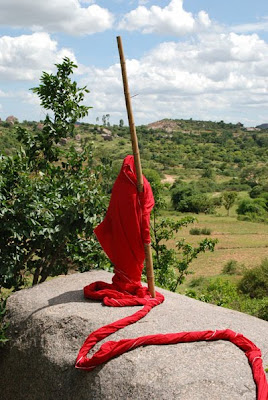 
To coincide with the 2009 Commonwealth People's Forum in Port of Spain, and to celebrate the Commonwealth Foundation's support for artists via the Commonwealth Connections International Arts Residencies, Alice Yard will host a new performance work by Trinidadian artist Akuzuru on the evening of Monday 23 November.

In 2008, Akuzuru spent several months living and working in India with the support of a Commonwealth arts residency. The result was Earthology, a "spatial work in three acts" incorporating large-scale sculptural installations and performance. The entire project is documented in a limited edition catalogue titled Earthology India.

Vein, the new work which Akuzuru will create at Alice Yard, is a further installment in what she conceives as an "epic opus" unfolding in locations around the world. The performance will begin at 8.00 pm and run for approximately 45 minutes.

The event will also include a small installation documenting the work of Nigerian artist Bright Ugochukwu Eke, who was artist-in-residence at Alice Yard in 2008, supported by the Commonwealth Foundation.

Vein is part of the programme for the Creativity and Innovation component of the Commonwealth People's Forum. Delegates to the forum and representatives of the Commonwealth Foundation will attend, and Alice Yard invites members of the public to come and join in an informal conversation about creative connections across the Commonwealth.

About the artist:
Akuzuru is an "experiential artist" known for her performances and large sculptural-installation works. Interdisciplinary in approach, she creates experiences, working primarily in the natural environment. She has had solo exhibitions in the United Kingdom, Nigeria, South Africa, and various locations in the Caribbean. She was artist-in-residence at the Bag Factory in Johannesburg in 2002 and a participant in the 2006 Galvanize programme in Trinidad.
Posted by Richard Mark Rawlins at 6:12 AM