Richard Bolai lived and worked in Trinidad. A bookbinder,Graphic designer and the author of thebookmann, which from 2004, had written on and photographed independently aspects of
Trinidad and Tobago's art culture. 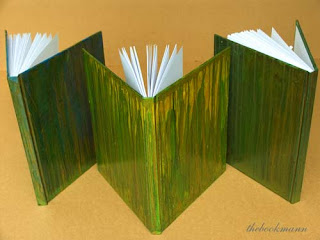 Since 2000, the Bookman has approached the art of painting though his craft of book binding. The work here is an example of what he is capable of doing. These oil journals are from a series which in 2006 where produced by the influences taken from a painting by Peter Doig called, the music of the future.

In 2008, he began a series of self studies called Feinin which incorporated digital superpositions of artists who have left a mark in art history by using the internet as the core of reference. He also produced parodies relating to anthropological studies of Trinidad and Tobago, for example, folklore or observations of the society via class and stereotypes 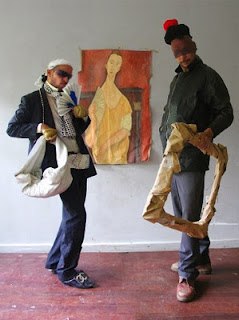 The work then expanded by actually creating dimensional replicas, capturing a map over the subjects to explore the underling subconscious in the form of art. This aided the ability to analyze art by producing art parodies to understand the meaning behind it. No money was spent or assistance in producing these compositions from common items found in his home, a chair, a mirror, or old tyre.

The artists lists includes, da Vinci's Last Supper, Koons's dog, Hirst's spin paintings, Andres Serrano's piss Christ to Monet to name a few, over one hundred artists' have been completed, producing one in every 24 hour cycle.

It should be noted that with the feinin studies, you should see that actual work that is been parodied via the link. It makes no sense otherwise.

thebookmann archives is a source of information for art academics and students alike. A major contributor to thebookmann is Adele Todd
Posted by Richard Mark Rawlins at 8:30 AM