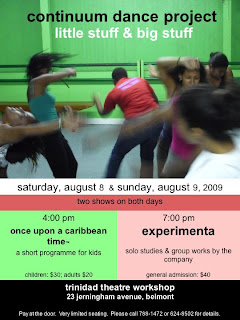 There will be two performances each day - the Once Upon a Caribbean Time stories for children will take place at 4:00pm, and Experimenta, a series of solos and group works by the company, begins at 7:00 pm.

Artistic Director, Sonja Dumas, who is the writer and creator of the CD entitled Once Upon a Caribbean Time from which the children’s stories will be adapted, is equally excited about the prospect of encouraging budding choreographers in Experimenta.

There is always room for new thinkers and movers in dance,
she said, and their efforts should be encouraged. Dumas will
also present two of her own works Vapse and The Strange Tale of an Island Shade. The latter is a work in progress.

Continuum Dance Project, which had its first public performance in 2004, is a creative laboratory that uses movement as its main tool of performance
exploration in a contemporary context.

Admission to the Once Upon A Caribbean Time show is $30 for children and $20 for adults. General admission to Experimenta is $40.


Reservations can be made by calling the Trinidad Theatre Workshop at 624-8502
Posted by Richard Mark Rawlins at 12:19 PM